The Old Days of Factoring

Technology has made factoring a more efficient business, requiring fewer banking skills, and much less labor than years past. Back in the 1980’s, when this author started in business, we were still working on handwritten ledger cards, and the “Yellow Pages” was the number one source of advertising. Even how people communicated was different. If you wanted to call the office you had to find a public pay phone and carry a stash of quarters.Cell phones didn’t exist until the early 1990’s. The phones cost upwards of a thousand dollars to purchase, and, it was 45 cents a minute to use them.

There were other issues that factors had to deal with, as well. When a prospect or client called the 800number back in the 80’s and 90’s, the factor paid for that call by the minute, at up to 40 cents per minute. Companies were essentially paying for all outgoing, and incoming calls. The telephone bill was one of the largest expenses, costing tens of thousands of dollars per month. Just calling across town, the telephone carrier could add toll charges of upwards of 15 cents a minute.

Email didn’t exist until the mid to late 90’s. That was only 25 or so years ago. Even then, not many people nor businesses had an email address. Fax machines had just been widely introduced, but they were so expensive that few businesses owned one. Even if a company had a fax machine, it didn’t help with funding. Back then, funding an invoice required getting original invoices mailed, hand delivered or couriered to the office in order to stamp them with a Notice of Assignment in embarrassing red ink and mail them to the debtor. In the 1980’s, most every small factor ran their business on account ledger cards. If you had a computer in your office, it hardly helped. There was no factoring software available until Bill Stucky of William Stucky and Associates wrote the first factoring software “FACE “ in 1984.

As more and more factors joined the tech revolution through the 90’s, the old timers delighted in telling technology driven visionaries, “I told you so,” when a little thing called Y2K came around. It seemed software programmers, to save memory, put all dates in two digits. That was fine for month and day because those didn’t change, but, the year always changed. The issue was entering the month, day, and year of December 31, 1999 as 12/31/99. That was all fine and good until the year 2000 rolled around. Was the first day of the New Year 01/01/00, or, January 1, 2000, or, January 1, 1900? Oops! Even as programmers around the world wrote fixes, no one, not even the programmers, knew what would happen at the turn of the century. 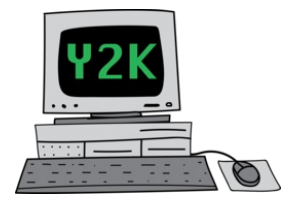 Because of the inefficiencies years ago, factoring used to be local. Today it’s global. In the 1980’s, this writer may have had 6 competitors in its market. Today, there are 60 or more. Prior to 1990, the average customer was within a 20-30 mile radius of the office, enabling someone to drop off original invoices and to pick up checks. ACH was near non-existent, and wires were very expensive to send and receive.

While it’s true that no one yearns for the good old days, we should remember and learn from them. The state of factoring now will one day be the good old days. If you want to be around in the future, just remember what happened to those who wanted to stay in the past.

If you want to move your business into the future, look to AeroFund Financial, take a minute, and give us a call